Hey Jude! and what it means to me..

Posted on June 19, 2012 by nootropicphilosopher 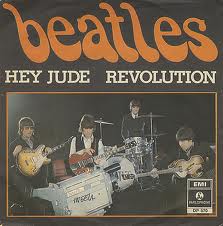 Just when I was having a ‘swell’ day, ( where did that word come from?’, suddenly felt sad about something entirely silly. When has that not happened?? ha ha.. At the beginning of the day I was listening to the recently discovered (or rediscovered, perhaps, though I have no recollection of listening to it before), the Beatles’ single- ‘Hey, Jude!’. At the risk of what purports to be blasphemy in possibly all circles that I will and have ever interacted with- I am not really too fond of the Beatles. Probably because I am too backward, possibly because I have bad taste ( I am being sarcastic, I am full of good taste, but paradoxically am willing to make this an exception to save face, something that I almost never do- save face, that is. I am also of course full of paradoxes like everyone else).

But, nonetheless, I love this song ( I also don’t mind ‘Let it be’ and ‘Yesterday’). But ‘Love is all you need’, ‘She’s got the ticket to ride’, ‘Can’t buy me love’ etc, just don’t do it for me. It is also likely because I can’t relate to the era of the sixties and early seventies where these songs were against the norm, new in most ways including the cult forming band, their lyrics and music arrangement.I was born in the nice transitional phase of black and white to color TV (in India), rock and roll was the norm and I didn’t like it growing up or even now.

Anyway, the song was recommended to me by no less than my only absolute favorite American writer – Stephen King. In his Dark Tower series, he writes

‘A fools chorus of half-stoned voices was rising at the final protracted lyric of ‘Hey Jude’- “Na na – nan na naa na”… hey, Jude”.. as he entered the town proper’.

He being Roland of Gilead (of course, to any King fan who reads this) and the town being Pricetown, a place in a world that has moved on (closer to destruction of everything good, innocent and beautiful). But still carries a few things of the ‘old’ world, that is our world. ‘Hey Jude’, being one of them. As usual, I try to read more into this than King may have meant, even though I think he writes in many layers, I would have to say ( this is based on all the forewords and afterwords he writes, in almost every novel, that I read with utmost sincerity) he loves and lived rock and roll and this might be his favorite song (by Beatles or all time). Maybe thats why I can’t be a professional writer- I don’t Rock and Roll (alas). He has said that all his work is somehow or other related to or coming of from the Dark Tower series, so it is likely that he would mention only his favorite song, in the hub of all his monumental pile of fiction works.

If I had a dying wish, it would be to meet him. That might change when I am actually dying- he doesn’t like to meet his fans, he speaks to them only through his books. I am okay with that, and I hope to attain some clarity of thought at least right before dying- if that is the last thing I do, to remember that!!

So, the idea is this song is soo good and beautiful that it would take literally the end of the world for it to be completely lost. I don’t know if I would go that far (remember, its still rock and roll to me and here, I don’t mean the song by Billy Joel). But I get the feeling, the haunted feeling that could lead people to believe that, when even I hear the song.

Wikipedia said that Paul McCartney wrote this sing on the way to meet John Lennon’s divorced wife and their kid Julian. Originally it was supposed to be Hey Jules, for Julian. Thats interesting. But what is really interesting is a lot of people actually thought and went on record to say that they thought the song was for them. McCartney may even have told Lennon (who thought it was written by McCartney for him amd was his way of telling Lennon to pursue the lady he left his wife and kid for), the song was for himself.

Here is what I feel when I hear it:

Life’s a sad song, that we have to make better every day. Maybe after a certain age for most people and perhaps at a much younger age for many. The only way we may hope to succeed in doing that, is if we let it (or her, life’s a bitch, isn’t she?) into our hearts and feel the pain, yet sense the beauty.

Hey jude, don’t be afraid.
You were made to go out and get her.
The minute you let her under your skin,
Then you begin to make it better.

To take the first step into the world, that will never be yours unless you at least try and may still never, quite, be yours. The only way to make your life and the world better is to let what bothers you, get under your skin.The alternative being living ephemerally and not feeling passion for anything.
And anytime you feel the pain, hey jude, refrain,
Don’t carry the world upon your shoulders.
For well you know that it’s a fool who plays it cool
By making his world a little colder.

Finally, every big-gish step in life comes with a package of pain, for us and for those who love us. To me the song says not to let that keep you from the people you love or from doing what you want to do..In so doing the world would get colder for us.

I think there was no better choice to haunt the Gunslinger- who had to go out at get ‘her’ – the Dark Tower.. And for those of us who absolutely loved the end of the series- he did make it better, by letting it get under his skin, but it is still a sad song.

I don’t know why I am writing about a song. I guess I should be able to write about anything, if I want to take writing seriously and if King can repeatedly refer to this song and say that versions of it must exist in every world- he is the boss, no EMPEROR, of fantastically real and parallel worlds and lowly me can do naught but agree.

Next up- Stephen Jay Gould ( who is also American and had he not been a scientist primarily, would have been my second favorite American writer) and my desire to be named Stephena (not stephanie, then I get caught up with vampires and love stories for teenagers that are not as cool, remember I am full of good taste.)

← Ruminating on the relationship between TV, cinema and culture
The Stephens I admire, adore and would like to be.. →

One Comment on “Hey Jude! and what it means to me..”